Rise of the Brave Tangled Dragons Wiki
Register
Don't have an account?
Sign In
Advertisement
in: Location, Rise of the Guardians, Villain's lair

Pitch's Lair is a vast cavern located deep beneath the Earth as seen in the film Rise of the Guardians. It is home to Pitch Black, The Boogeyman, The Nightmare King, and is where he holds his prisoners.

Pitch's lair is a vast cavern located deep beneath the earth. It can be accessed through any shadow, but only by Pitch or his Fearlings, Nightmare Men, Dream Pirates, or Nightmares have access. For anyone else to enter the Lair undetected, they would have to find the skeletal bed in Burgess. Underneath this bed is a deep tunnel that leads directly to Pitch's lair.

It is a place where the normal laws of physics don't appear to apply. The dimensions take on many twists and turns and can suddenly run into dead-ends that open up seconds later.

From the ceiling dangle many rusty, spiked cages that Pitch uses to hold his prisoners. In the film, the cages were used to hold Toothiana's mini-fairies. In RotBTD, the cages are often used to hold any captured members of the Big Four of Guardians within and is used after Pitch battles and defeats them.

At the centre of the cavern stands a globe of belief, much like the one at North's Workshop. However, unlike the Guardians, Pitch wants to make sure all of the lights go out.

In the chapter books, that inspired the film, Pitch has multiple lairs all over the world. One of Pitch's first lairs, in E. Aster Bunnymund and the Warrior Eggs at the Earth's Core!, was built close to the Earth's core, as light cannot reach it. The walls of the Earth core lair were coated in metal, while its air reeked of sulfur and has shallow pools of milky lava flowed across its floor. When Pitch kidnapped Nightlight and the children of Santoff Claussen, in an attempt to obtain Ombric's spell books from library, he placed his hostages in the lair's lead cages. As they waited for exchange, Pitch's army of Fearlings were forging molten lead weapons and armor so they could become more solid, less shadowy and absorb the light of the world leaving only darkness. As well as to protect themselves from being burned from both the sun and moon's light.

In The Sandman and the War of Dreams, Pitch returns to the cave that Nightlight originally imprisoned both of them in, so he could have a place to hide a sleeping Katherine, while he encased her in a coal-colored slab of marble that had been carved into a coffinlike shape composed of endless Nightmare Men, until the Sandman, Sandy and Nightlight came to rescue her. Sandy and Nightlight escape from the Dream Pirates, Nightmare Men, and Fearlings in the cave on a Dreamsand cloud. They soon find out that tiny Nightmare Men are being sucked up Katherine's nose and mouth dooming her to an eternity of nightmares and that the Nightmare Rock/Stone is contaminating the Dreamsand into Nightmare Sand which is devouring the Dream Cloud. They soon defeat the countless Nightmare Men from the cloud and Nightlight gives Katherine the "kiss of goodnight" that broke the Nightmare Rock spell and ends the nightmares.

In the film, Pitch's lair is a huge underground base with multiple cages, bridges and escalators. The whole environment is built at an angle and it feels like it's falling off a cliff into an abyss. In addition, it has negative elements from all of the Guardians' respective worlds. For example, he has a Globe, just like North does, to keep track of the belief of the world's children, but it's colored grey and black.

While this ancient palace is located in Venice, Italy, it has multiple entrances that connects it to different parts of the globe. One of this entrances is under a broken bed in the middle of the forest, not far from Burgess and Jack's Pond.

Much like in the film, this den of shadows functions as Pitch's base of operations. He may lure other members of the Big Four into it (much like he did with Jack), using the dark corridors to separate them and pick them off one by one. It can also serve as a base of operations not only to Pitch, but to his accomplices as well (like Mother Gothel). The cages could also be used for different purposes like with Mor'du or (if at all possible) the Red Death.

Burgess Entrance to the Lair 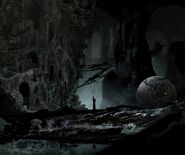