Rise of the Brave Tangled Dragons Wiki
Register
Don't have an account?
Sign In
Advertisement
in: Films, How to Train Your Dragon, Primary Films

It's been five years since Hiccup and Toothless successfully united dragons and vikings on the island of Berk. While Astrid, Snoutlout and the rest of the gang are challenging each other to dragon races (the island's new favorite contact sport), the now inseparable pair journey through the skies, charting unmapped territories and exploring new worlds.

When one of their adventures leads to the discovery of a secret ice cave that is home to hundreds of new wild dragons and the mysterious Dragon Rider, the two friends find themselves at the center of a battle to protect the peace. Now, Hiccup and Toothless must unite to stand up for what they believe while recognizing that only together do they have the power to change the future of both men and dragons.

Five years after the Viking village of Berk has made peace with the dragons, dragons now live amongst the villagers as working animals and companions, and even take part in racing sport. Hiccup goes on adventures with his dragon, Toothless, as they discover and map unexplored lands and territories. Having come of age, he is being pressed by his father, Stoick the Vast, to succeed him as chieftain, although Hiccup remains unsure if he is ready for this responsibility.

While investigating a wildfire, Hiccup and Astrid discover the remains of a fort encased in a colossal ice formation and encounter a dragon trapper named Eret, who blames them for the destruction of his fort and attempts to capture their dragons for an insane conqueror called Drago Bludvist. The two riders return to Berk to warn Stoick about the dragon army that Drago is amassing, and Stoick orders the villagers to fortify the island and prepare for battle. Instead deciding to attempt to reason with Drago, Hiccup flies off with Astrid and they surrender themselves and their dragons to Eret so as to be taken to Drago. However, Stoick, Gobber and Berk's other dragon riders pursue and find them.

Stoick explains he once met Drago before and that he was an unreasonable madman, but Hiccup refuses to believe that war is inevitable and again flies off with Toothless. They are captured by a dragon rider named Valka, who is revealed to be Hiccup's long lost mother. She explains that she spent twenty years rescuing dragons from Drago's traps and bringing them to an island haven created out of ice by a colossal Alpha dragon called a Bewilderbeast, to whom all dragons answer. Stoick tracks Hiccup to the island where he discovers that his wife is still alive. Simultaneously, Astrid and the other riders kidnap Eret so as to find Drago, but they are also captured and Drago thus learns of Berk's dragons.

Drago and his army lay siege to Valka's sanctuary, where he reveals that he has his own Bewilderbeast to challenge the Alpha. A titanic battle then ensues between the two Bewilderbeasts in a fight for control over all dragons on the island. Drago's Bewilderbeast emerges victorious and seizes control of all the dragons, including Toothless. Hiccup tries to persuade Drago to end the violence, but Drago orders him killed as well. Toothless, under the influence of the new Alpha, approaches Hiccup and fires a plasma blast. At the last instant, Stoick pushes Hiccup out of the way, and is hit instead. Drago leaves Hiccup to his fate and, riding Toothless, leads his now larger army to destroy Berk. Stoick is given a ship burial and Hiccup, now filled with vengeance and regret at the loss of his father, decides that he will fly back to Berk to defend his people and live up to his father's legacy.

Defeated, Drago and his Bewilderbeast retreat into the ocean as the villagers celebrate their victory. All the dragons acknowledge Toothless as the new Alpha dragon, and Hiccup is made chief of Berk by the village elder. The film ends with Berk being rebuilt with a statue of Stoick erected in his honor, and Hiccup doing his duties as chief, proudly declaring that while others may have armies and armadas, Berk has its own dragons.

At 2013's CinemaCon event, DreamWorks premiered a teaser trailer for the film. In the film (shown below), Hiccup is now 20 and sporting a more mature appearance and body shape. It appears that the rider and dragon both have new leathers to support them in flight, as shown in the trailer. The trailer features a new form of flying for the two that features an independent Toothless and a skydiving Hiccup, both actions impossible in the previous film.

Two more trailers have been released since then, showing the general plot of the movie and featuring new characters such as Valka, Drago Bludvist and Eret. Both trailers contain mild spoilers about Valka's identity and the antagonists of the movie. A series of clips have been released periodically, including an edited version of the first five minutes of the movie, the naming of Itchy Armpit, the dragon races at the beginning of the film, and an unknown sequence recently screened at WonderCon.

A series of character posters featuring the protagonists and their dragons have also been released, along with two other generic posters and several promotional images.

Valka from How to Train Your Dragon 2 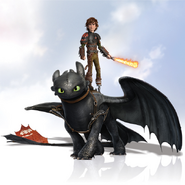 Hiccup and Toothless in some new gear 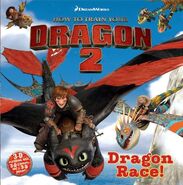